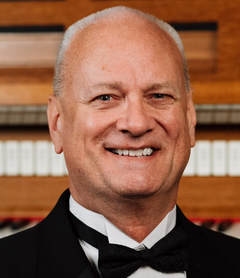 Dan Miller is internationally renowned as an organist with an extensive concert schedule. He has also taught music, conducted choral groups and orchestras, led and facilitated worship in many different settings, and managed large concert productions and music conferences.  He is also respected as an innovative leader in handbells.  A professional member of the American Society of Composers and Publishers, Dan Miller is well-known for his composing and arranging, and has several published works.  He has been seen and heard live in concert and through recordings on radio, television, and the internet.  He has been the featured solo organist with several symphony orchestras.  He is a former Dean of the Ft. Lauderdale chapter of The American Guild of Organists and is a member of the Portland chapter AGO.  He is an Adjunct Professor of Organ at George Fox University in Newberg, Oregon.

Dan is in his 24th year at Rodgers Instruments US LLC, one of the world’s leading organ builders, located in Hillsboro, Oregon, USA. He is responsible for the artistic and musical decisions for the Rodgers’ sound, selection of stops, pipe organ samples and orchestral voices, and console layouts. He is a member of the product development team. He performs final musical testing of each organ before it is packaged and shipped worldwide from the factory. Dan recorded 350 hymns for the Hymn Player technology which is resident in each organ. In addition, he does product training for sales representatives and technicians, but what he enjoys most is celebrating new organ installations around the world with workshops, concerts, and other musical events.

A church organist since age fifteen, Dan Miller has served at several notable churches.  At Calvary Church in Charlotte, North Carolina, he presided over the world’s thirteenth largest pipe organ (Moller 5 manuals/205 ranks with 11,499 pipes); at Coral Ridge Presbyterian Church, Fort Lauderdale, Florida, he served as assistant organist to Diane Bish.  Currently Dan is the Organist for St. Matthew Lutheran Church and a Guest Organist for Bethel Congregational Church, both in Beaverton, Oregon, and a Guest Organist for Rose City Park United Methodist Church, in Portland. He also serves many churches nationwide as Guest Organist for their worship services.

Dan Miller holds a Church Music Diploma from Moody Bible Institute.  He majored in organ performance at the American Conservatory of Music, holds a Bachelor of Fine Arts degree from Florida Atlantic University, and a Master of Music degree in Organ Performance from Winthrop University.

Dan Miller has recorded 22 organ compact discs, of which some selections have been broadcast on National Public Radio’s “Pipedreams.”  His first CD, The Calvary Organ Dedication, was chosen as “The Organ CD to Die For” by Stereophile magazine in its February 1994 issue.  He continues to enjoy his work with teams and committees as consultant and advisor in designing heroic grand organs of world-class significance and preeminence.

Dan and his wife Sandy live in Hillsboro, Oregon. They have two children and four grandchildren.

"Miller's finesse and technical virtuosity are truly amazing - he combines musical sensitivity with beautifully controlled flamboyance. From the straightforward voicing of Bach's Toccata & Fugue in d to the very complex registrations in Reger's Fantasy and Fugue on "How Brightly Shines the Morning Star", this recording will keep you spellbound throughout. A must buy for every audiophile, and for anyone who likes the sound of a large pipe organ."
Stereophile magazine, "Records to Die For"

"You don't even have to be a fan of organ music to be utterly amazed by Dan Miller. He is absolutely one of the best organists in the world. Dan hails from North Carolina originally and was director of music at the huge Calvary Church in Charlotte. He oversaw the installation of the Calvary Church organ (13th largest in the world) and the sound of this instrument alone demonstrates Dan's capabilities. Dan now works for Rodgers Organs in Hillsboro, Oregon; he is responsible for the quality and sound of their products. If you've heard a Rodgers Organ lately, you'll know a genius is behind them! Dan played two concerts in the Toronto/Hamilton areas last year and if you weren't there, you missed the experience of a lifetime! Check out Dan's website at www.danmillermusic.com and then buy the Calvary Organ Dedication CD. It's been described as the organ CD "to die for!"
The Toronto Organ Club
​
'There is the added joy of having [the Calvary Grand Organ] presided over by one of the finest of the young organists of the generation. Dan Miller is not only vastly musical and superbly gifted, but he understands this magnificent new instrument and uses it to its fullest potential. I urge you to hear this unbeatable combination"
The American Organist

"When you listen to Dan Miller play the organ, you definitely feel like you're in Heaven. The awesomeness of Dan's music is only rivaled by the awesomeness of his career.'
Beaverton Christian Church

"Dan Miller on the Rodgers Organ was unbelievable!"
The Hillsboro Argus

Dan Miller was exceptional in personality, person-ability and of course, performance.  His manner and interaction with the folks, his programming and performance, and his demonstrated expertise with affability will, without a doubt, enhance the product and reputation of Rodgers in our "neighborhood."

His manner with all the groups he dealt with was impeccable. He met them where they were, engaged them, helped them and made them laugh while doing it! Dan led the workshop sessions and presented the concert artfully, even managing transitions with consummate skill! Of course, his command of subject matter and performance at the organ were also stupendous!

Dan’s sensitivity to the congregation by playing their requested favorites for the concert was outstanding. I observed smiles and tears all throughout the evening…these people were blessed!

I want you to know that Dan did a magnificent job conducting the workshop and performing the dedication concert this past weekend.  Dan also played the 11am Sunday service and the congregation gave him a standing ovation. He brought many to tears with his deeply moving and creative hymn interpretations. He is an artist of the highest order.

Dan did a wonderful job both in presenting the organ in the workshop and in the concert. The organ was exciting, and several people commented that they had no idea that an organ could be so versatile.

Dan Miller is one of my favorite composers and arrangers of organ music. He writes beautiful, useful arrangements of beloved, familiar hymns and songs. Dan is also my favorite guest organist for dedication concerts and workshops because he is a wonderful musician and he is warm, personable, and generous. Everybody loves Dan Miller!

Dan Miller (b. 1954) has been featured in concert and events for 50 years. Each event is tailor-made to best suit the audience. Dan carefully crafts the concert program to make the program interesting and enjoyable. He has a reputation of leaving audiences thrilled at the music, emotionally impacted by the beauty of the organ with all its variety of colors and moods. Dan's goal is to present the organ as "people-friendly," to include music the audience would enjoy. Another goal of Dan's is to show as much of the organ's tonal resources as possible. Dan's typical church organ concert presentation of approximately 70 minutes usually includes a variety of music styles, such as:Dan has appeared at large events and small, bringing the joy of organ music to the people far and wide. He has played organs grand and modest, delighting the audiences with enjoyable music. He has been the featured artist for concerts and events at notable locations including:
Copyright 2023 Daniel L. Miller. All rights reserved.