The magnificent pipe organ of Calvary Church is internationally renown as one of “the” organs in history. Built in 1986—1990 by the M.P. Möller Company of Hagerstown, Maryland USA, the Calvary Grand Organ is the thirteenth largest playable organ  in the world, and has a replacement value of well over 3 million dollars.

The purpose and mission of the Calvary Grand Organ is to aid in providing a true worship experience and to help proclaim the message of salvation to all who see, hear, and play it – that the commandment of the scripture will be fulfilled: “Praise Him … with the organ.”

Carefully planned and designed for the congregation of Calvary Church, the 205 rank organ has 11,499 pipes ranging in size from 40 feet tall to hundreds of tiny pipes smaller than soda straws. Why is the organ so large? First of all, because of the spacious 5,500-seat sanctuary with 2.5 million cubic feet of airspace and excellent acoustics of a reverberation time just less than 3 seconds. Secondly, to fulfill the organ’s multiple ministries: to support strong congregational singing; to sensitively accompany choir and vocalists; to provide a spiritual environment for worship, prayer, communion, commitment; to meet the varied demands of Calvary’s diverse musical styles and literature – from 5th century hymns to Bach and Beethoven to southern gospel to contemporary Christian music; to provide festive music to celebrate weddings and other occasions. By meeting all these needs, the organ automatically becomes a grand concert instrument that can play virtually any composition ever written for the organ.

To command all the resources of this instrument requires the massive console – five keyboards (manuals) and pedalboard, 306 wooden drawknobs, and around 200 other controls. To the layman, the magnitude of the organ console may resemble the cockpit of an airplane or space shuttle with the array of stops, buttons, dials, lights, foot pedals, knobs, and switches. The Calvary Grand Organ’s handcrafted Honduras mahogany console is one of the largest American-made drawknob consoles.

This achievement in sound reflects our rich church music heritage, and is a monument of excellence and praise to God: “Let everything that hath breath, praise the Lord!” 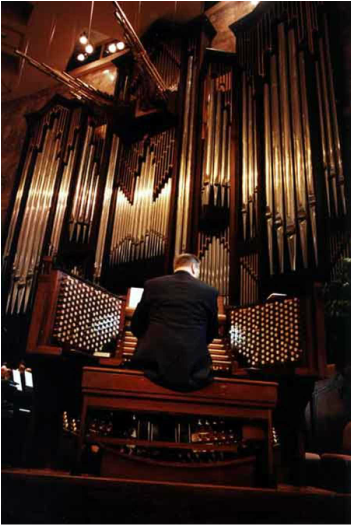 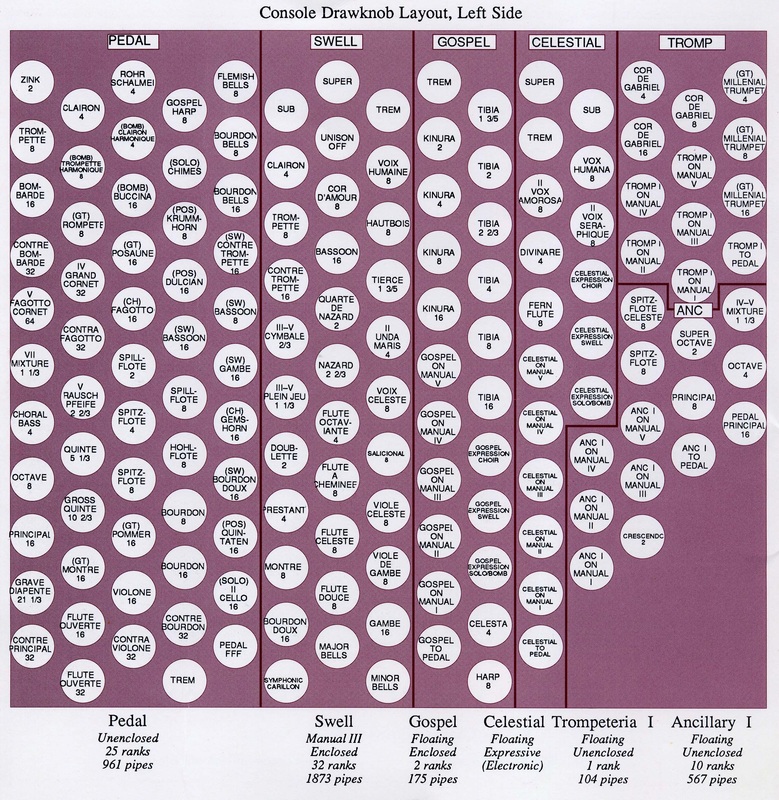 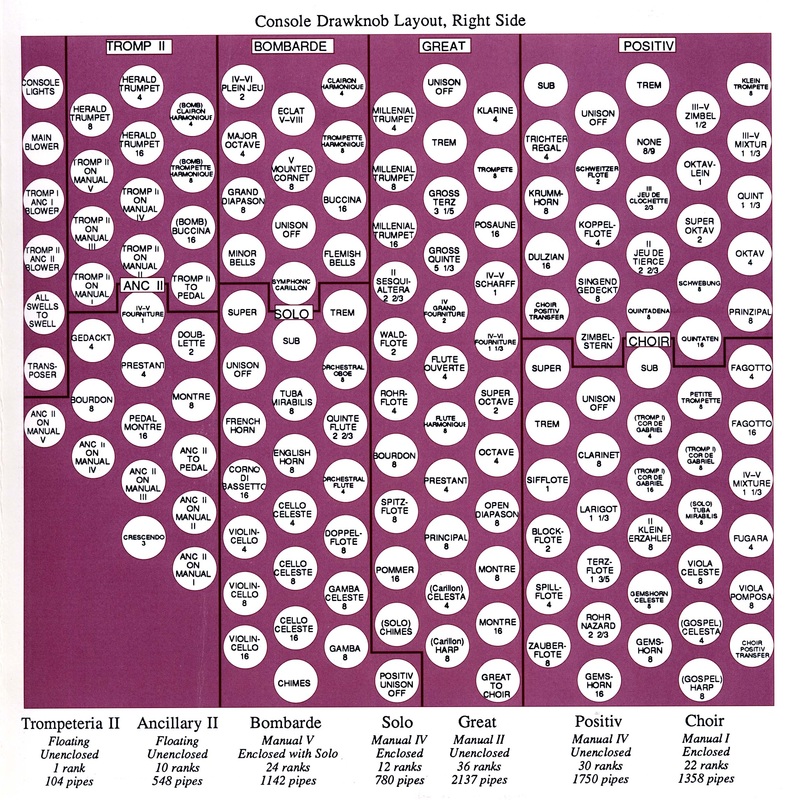 5 manuals, each with 61 keys of bone naturals and walnut sharps
Floating divisions that can be assigned to any manual or pedal via couplers:
Celestial
Gospel
Ancillary I
Trompeteria I
Ancillary II
Trompeteria II

32-key pedalboard with maple naturals and walnut sharps
Electrically adjustable bench with removable backrest
Solid State Logic multiplex system scans all console functions 250 times per second (stops on/off, key attack/release, position of expression shoe, etc.). The signal is sent from the console through a quarter-inch co-axial cable to the pipe chambers.
There are four locations in the chancel stage floor for console connections.
Solid State Logic combination action, with 24 memory levels and three settable crescendo sequences. Tuttis and silencers are settable on every memory level.
A concealed door gives access to the power lockout and the memory lockout.
The power controls are located on four drawknobs that rotate a quarter turn for power on or off.

Adjustable combinations:
The console incorporates the usual inter- and intra-manual couplers, silencers, reversibles, and other controls commensurate with an organ of this size.

More than 5,500 people attended the Dedication Concert of the Calvary Grand Organ, on August 26, 1990. The organist for the Dedication Concert was Dan Miller. (pictured above)
The Calvary Grand Organ has been broadcast internationally via Pipedreams (Public Radio International), The Joy of Music, and the Internet.
Contact Calvary Church for more information (www.calvarychurch.com) 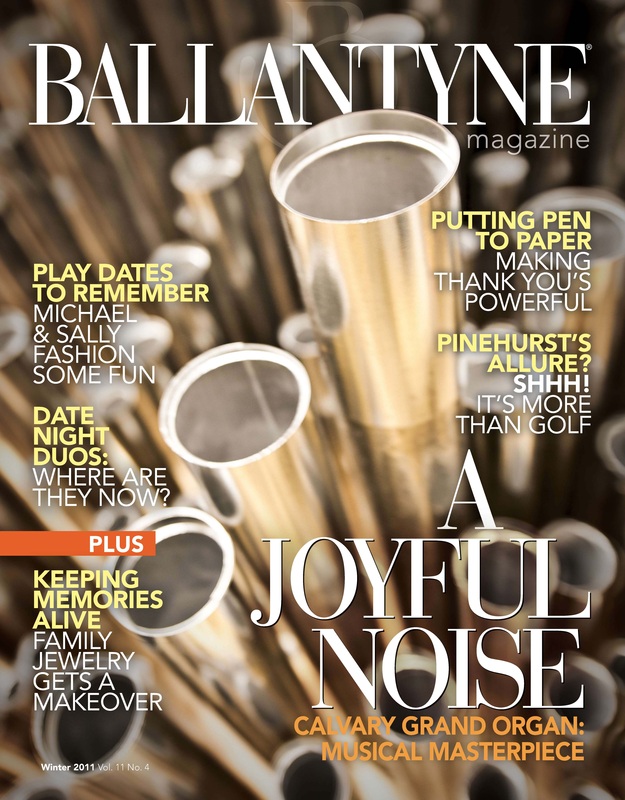